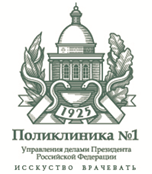 Combined mark «Polyclinic №1» was created on motives of the character of the medical practice – bowl with a Snake and a fragment of the building of the Kremlin polyclinic, the most recognizable part of the rotunda over the main entrance. The sign on both sides of the traditional medical bowl symmetrically opposite each other are situated two of the serpent, who represent two approaches in medicine – both traditional and modern. The image of classical rotunda with a colonnade and dome, which completes the spire, symmetrically surrounded with two branches: the left branch of Laurel leaves symbolizes the glory, the right – of oak – a symbol of longevity, emotional and physical health.
Year education FSBI “Polyclinic №1” – 1925, this date is centered at the base of the mark on the tape, which encircles the next, both branches and tails snakes.
Under the belt is the motto «Polyclinic № 1» – a HEALING ART. 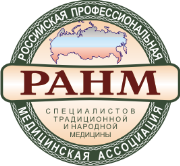